1. A mother of a baby boy who giggles like an evil villain.
2. One who has written YA science fiction since before she knew it had a name.
3. A woman with a passion for all things related to the country of Ghana, Africa.

In the last post about setting, I talked about this sometimes-ignored but very important tool for enhancing your story, characters, themes, and tones. Now I’m going to delve into more detail about how to actually create your setting so it does those things. There’s five points I’d like to make on how you can create a setting for your reader.

It’s what one of my creative writing professors called “the dog rule.” For example, you say, “The dog walked toward me.” Every reader is going to have different views of the dog, and it might not be what you want them to see. But you probably don’t want to say, “The scraggly, wet, brown, muddy dog lumbered menacingly toward me.” That’s way too much description (or at least too many adjectives in a row), which actually weakens it. Aim for the middle: “The mangy dog limped toward me.”

The key is to ask yourself, “what does the reader need to know about this setting?” Then give them that.

2. Vary how you deliver the setting.

It’s important when characters enter a new setting to get them “blocked in”—give them concrete details about where they are. Otherwise, they’ll feel lost. However, don’t ignore your setting after that. Drop in details, especially ones where your character interacts with the scene. Have the wind blow their hair, or maybe let them trip on the rug. But be careful—you don’t want your character bumbling around the room throughout an entire conversation. Instead, have your character interact with the setting in a way that enhances the scene. In one of my stories, a character is in a plane for the first time. He feels trapped by the circumstances of the scene, and I use his discomfort of being in a cramped seat to echo this. 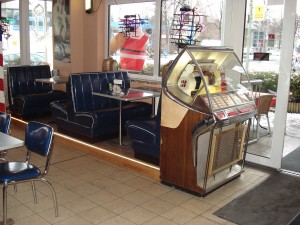 3. Don’t just give details, give the right details.

You don’t have to describe everything from carpet to ceiling in a room. If it’s a bedroom, readers are going to guess there’s a bed in it. So maybe describe the stuffed animal on the bed—something that the character notices because it was given to her by her grandmother who just died. This can be a powerful part of the setting, even if it’s never brought up again, because it emphasizes the character and the plot.

Also use the right words. You’re a writer—words are what you use every day. Just remember that best doesn’t mean biggest. If you want your character slouched in a grimy armchair, you can call it grimy, not encrusted. The best word means the word that brings out exactly what you’re trying to communicate—or at least as close as possible. And keep in mind this doesn’t mean just adjectives and adverbs! Nouns and verbs are parts of speech too, and they can be important descriptive words.

One of the most helpful things I’ve found for this is reading poetry. Poets have a lot fewer words to get across their point, so they have to pick them carefully. One of my personal favorites is Tennyson, but there are many poets out there whose work can help you better yours.

4. Plan your settings ahead of time.

We plot our stories, craft our characters, but what about our settings? Do you ever plan yours out? Some people map their worlds, but I also like to plan out my smaller scenes. This can help you identify themes and tones your setting can enhance. For example, in my current novel, I listed out some of my major settings. I realized that all of them were either in a state of (or representative of) death and decay. This is something I decided to emphasize, to bring a sense of cohesiveness to the tone and themes of my story. By knowing this ahead of time, it helped me pick those details I wanted to emphasize.

5. It’s not about what it looks like, it’s about how your character sees it.

This is where you can use your setting to emphasize your character and their voice. If your character wanders into an old café, do they notice the bright colors of the tables and chairs because they’re an artist? Or do they smile at the music from the old jukebox in the corner because they’re an oldies fan? You can’t describe everything, so emphasize the things that your character would notice. And stay within your character’s voice with descriptions. It gets aggravating when a character walks around saying things like, “Dude, that was freakin’ awesome,” and then goes on to describe a fireworks display as “a magnificent, many-faceted supernova.” (And yes, that example would be from my own early writings.)

In my current novel, one of my characters often sees things as a reflection of his own past. So when he walks through the looted and dilapidated town center, he sees the empty buildings like the shells his father once showed him on the beach. That’s how he looks at things, how he processes things. It enhances his character as it creates a vivid setting, and even highlights a theme of loss.

Biggest lesson on setting? Don’t neglect it! And don’t just let it be a simple description of a place. Make it a multi-purpose setting, one that does two or three things at once. Your readers will have a much more powerful experience, and connect to your novel better, if you can make proper use of setting.

To see how to work setting in for crossover fiction, check out this post.