A long time ago, in the little state of Utah, one of my critique group members has moved away.

Now this had happened before. Our little critique group has gone through some serious fluctuation as people have come and gone. But this time, something different happened.

WE REALIZED WE COULD STILL SKYPE!

And suddenly, the world became a much better place. As such, we ended up using some google thing to talk to each other. Which is nice, because you can see everyone’s faces on the bottom of the screen, but the top main screen will change to whoever is talking at the time.

(From left to right: Deborah and Chersti, Karen, Kevin – who doesn’t have a webcam, Rachel, Shallee)

Now the biggest problem is that the google program has this awesome app where you can dress up. Seriously. Check it out! Apparently mustaches are really popular in my group. 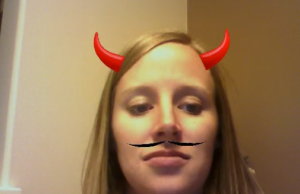 And after staring at myself onscreen for a few hours, I realized something… I think I’m going to have to start wearing makeup to group now. Ack!

6 thoughts on “This Week at Critique Group: Making Faces”