Just a quick note to say that Brodi Ashton’s book EVERNEATH is coming out tomorrow (January 24). I was lucky enough to read an ARC, and I’m so excited to say you will not be disappointed.It seriously made my top 10 list, and I’m delighted that others can finally read the book!

Here’s a quick blurb from Amazon:

Last spring, Nikki Beckett vanished, sucked into an underworld known as the Everneath. Now she’s returned—to her old life, her family, her boyfriend—before she’s banished back to the underworld . . . this time forever. She has six months before the Everneath comes to claim her, six months for good-byes she can’t find the words for, six months to find redemption, if it exists.

Nikki longs to spend these precious months forgetting the Everneath and trying to reconnect with her boyfriend, Jack, the person most devastated by her disappearance—and the one person she loves more than anything. But there’s just one problem: Cole, the smoldering immortal who enticed her to the Everneath in the first place, has followed Nikki home. Cole wants to take over the throne in the underworld and is convinced Nikki is the key to making it happen. And he’ll do whatever it takes to bring her back, this time as his queen.

So what did I love about this book? Without giving away spoilers, I loved how real the characters felt, and how the protagonist has to face choices and consequences. To be honest, the book was too enthralling for me to put down so I stayed up all night reading it — which got scary, because at one point Nikki looks at a clock and it’s the middle of the night. And when I looked at my clock, it was like 2 minutes away from the same time. And that’s how I know that Brodi secretly wrote that book for me. Isn’t life great?

I also will be attending the book launch tomorrow at The King’s English — hope to see some of you there! 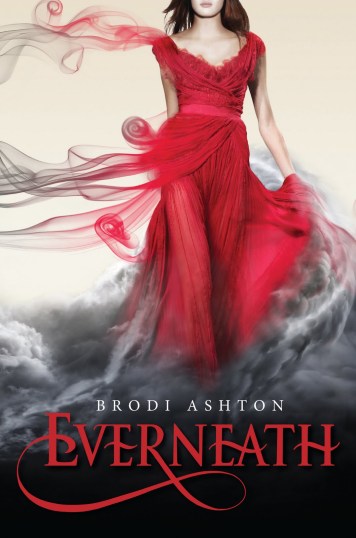 13 thoughts on “This year’s book to read! EVERNEATH by Brodi Ashton”