When I head that Elana was getting a new cover, my first thought was: oh man! I have to go buy a new copy now…

Not that that’s a bad thing. 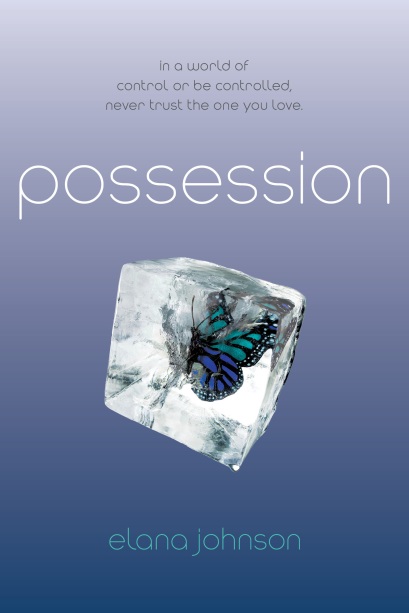 And for book two…

The thrilling and seductive sequel to Possession puts love on the line in a dystopian struggle for independent thought. Forbidden love, intoxicating power, and the terror of control…     Raine has always been a good girl. She lives by the rules in Freedom. After all, they are her father’s rules: He’s the Director. It’s because of him that Raine is willing to use her talent—a power so dangerous, no one else is allowed to know about it. Not even her roommate, Vi.

All of that changes when Raine falls for Gunner. Raine’s got every reason in the world to stay away from Gunn, but she just can’t. Especially when she discovers his connection to Vi’s boyfriend, Zenn.

Raine has never known anyone as heavily brainwashed as Vi. Raine’s father expects her to spy on Vi and report back to him. But Raine is beginning to wonder what Vi knows that her father is so anxious to keep hidden, and what might happen if she helps Vi remember it. She’s even starting to suspect Vi’s secrets might involve Freedom’s newest prisoner, the rebel Jag Barque….

So here’s my take on the cover:

I am ALL ABOUT FONT. And this font just fits the book so well. LOVE LOVE LOVE! A yes, that makes a big difference for me. I really liked how Elana’s name was in a signature font,but the uniformity of the new books can’t be beaten! And the pictures are so gorgeous and fit amazingly well with the color of the cover itself. Wow! The original cover seemed to fade in on itself with all the white, and adding the color really made the ice cube POP! at the middle.

Now let’s look at the tags:

Control or be controlled

In a world of control or be controlled, never trust the one you love

Personally, I like the first one. It’s to the point. Which tag do you prefer?

I guess for me, the only disappointing thing is that they won’t release the new POSSESSION cover in hardback! Oh well… I’ll hold out that someday they’ll change their minds on that one.

What do you think of the new covers? Have you seen any new covers you immediately liked or disliked? And who else is excited about SURRENDER???

4 thoughts on “SURRENDER by Elana Johnson (and POSSESSION’s new cover!)”