There is no metaphor here. 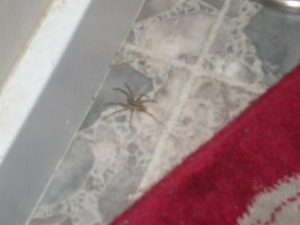 See this HUGE thing? Yeah, I killed it just after I had it pose for a picture.

To me, this is the ultimate form of bravery. At least it would be if you asked Ron Weasley.

And now for a thought for you: What would happen if only the first Harry Potter book was published?

[2] We actually wouldn’t know much about Dumbledore at all because he’s very minimally in book 1.

[3] We would never know the overarching plot of Voldermort, or have all the questions answered that were so carefully set up in book 1 (such as: Why did Harry live?)

[5] We would have no idea who Tom Riddle was or that there was a Chamber of Secrets or a Room of Requirement.

[6] We would never have visited Hogsmeade or gotten to see a Quidditch World Cup.

So what does this teach us? That every sequel takes your further than the first book, just like building blocks. You are introduced to new characters, visit new places, and conquer new enemies. But that all goes on top of the foundation you have built in book 1. The amazing things is how you get to flesh out the world you have created, and the story usually gets better.

And now the Writing update:

Today’s distraction was brought to you by: This ﻿HUNGER GAMES ﻿youtube clip (stop right now and watch it!) and this wedding story: http://is.gd/e0Lzl