One thing that can come out as so cliché is when a character overhears a conversation. BUT, disagrees one avid blog reader, IT IS SO IMPORTANT! MY PROTAGONIST HAS TO OVERHEAR THIS CONVERSATION SO THE READER KNOWS WHAT’S GOING ON! 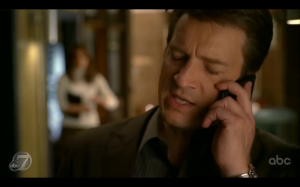 Okay, so I do agree with that. And I’ve noticed a few times when this is done really well and doesn’t come off as cliché. Let’s look at 3 examples.

At the end of one of this season’s episode, Beckett overhears a conversation. She hears Castle breaking up with his girlfriend / ex-wife / publisher / we’re not sure what to title her. See the short clip here.

Why does this work?

[1] Castle leaves to a (somewhat) private area to have this conversation, and Beckett just happens to walk in on him. Though with the look on her face, she may or may not be following him on purpose.  [2] Beckett walks in at the right moment. She hears ONE SENTENCE before she turns around to leave.

[3] Castle doesn’t know that Beckett knows, though this information will very much go public very fast and Beckett would know anyway. So why is it important that she overheard this conversation? Ignore the fact that now the viewer knows Castle is FREE, and look at Beckett’s (fantastic) face above. Because Beckett overheard this conversation, she then reacts differently than she might have, had she not know the situation. And  And don’t we just love the outcome?

In many of the books, Harry is injured and wakes up in the hospital. The people around him are talking, and he hears the conversation. There are also other times when Harry overhears a conversation. This works because [1] If it is an important conversation Harry shouldn’t hear, the conversation is short and to the point. If he can hear it, then he is awake and there is a group of people all so involved in the conversation they don’t notice Harry has woken up yet. 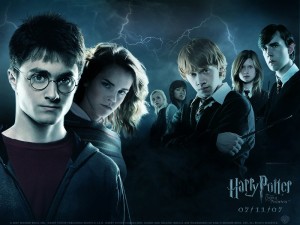 [2] Harry almost always makes himself known to be overhearing the conversation, or in other instances, one of the persons is aware that Harry is there and listening. [3] In Book 4, Harry drops his book and kneels down to get it to overhear what Karkeroff is saying to Snape. So he takes action to overhear a SHORT conversation, and is then caught for his action.

The Tiger in the Well by Philip Pullman

Sally Lockhart sneaks out of bed at night to explore the basement, where something is hidden, and overhears important things said between two of the villains. They have quite a long conversation that Sally overhears, and helps the reader put the clues into place. But it works because [1] she’s someplace she shouldn’t be where the villains feel safe to talk openly. [2] She’s hidden, and there’s added tension that she’ll be discovered and can’t escape.

12 thoughts on “the overheard conversation [a look at Harry Potter, Castle, and Sally Lockhart]”